Nexus to Acquire the GB Copper-Gold Project in Central Newfoundland

Vancouver, Canada / TheNewswire / May 28, 2019 – Nexus Gold Corp. (“Nexus” or the “Company”) (TSX-V: NXS, OTCQB: NXXGF, FSE: N6E) is pleased to announce that the Company has reached an agreement with Robert Stares, an arms’-length party, to acquire a series of mineral claims located in Central Newfoundland and commonly known as the Gummy Bear (“GB”) Copper-Gold Project (the “Project”). In consideration for the Project, the Company is required to issue 4,000,000 common shares. The Company is also required to grant a 2.0% net smelter returns royalty on commercial production from the Project, one-half of which may be purchased at any time for a cash payment of $1,000,000.

The Project is located in Central Newfoundland, 15 km south of South Brook and 40 km north of Badger on the Trans-Canada Highway. Woods roads give good access to all parts of the Project . The Project consists of 7 Claims and covering an area of 2,525 hectares.

The Project is underlain on the eastern side by mafic volcanics of the Roberts Arm Group, a steeply dipping, attenuated and deformed sequence of dominantly submarine volcanics and volcanogenic rocks. Much of the central part of the Project is underlain by the Gull Island Formation (Badger Group), comprising marine siliciclastics. A tectonized block of melange termed the Sops Head Complex occurs locally. Marine siliciclastics of the Pennys Brook Fm (Wild Bight Gp) occur to the north. Marine sandstones of the Crescent Lake Fm (Roberts Arm Gp) underlie parts of the NE section of the Project.

The Company is acquiring the Project to investigate the gold potential based on anomalous gold occurring in outcrop which graded up to 4.2 g/t Au. In addition to the gold showing, several large boulders containing pyrrhotite, pyrite and chalcopyrite have been discovered to the south west which have returned assays ranging from 2.76 – 4.02 % Cu. Historic aeromag/ EM surveys conducted in 1989 identified six parallel conductors a few kilometers to the east of the boulder train.

Three additional showings occur in the western portion of the claim block, the Moose Brook Showing, the Tommy’s Arm, and the Rocky Point Cu showing. Mineralization is described as consisting of disseminated chalcopyrite, pyrite and possibly molybdenite in the mafic to felsic flows of the Roberts Arm Group (Elias, 1957). Alteration includes graphite and several narrow bands of hematite. Pyrite occurs with the graphite. Mineralization is interpreted as pre-to syn-tectonic. Elias (1957 estimate that 1-2% Cu is present. The Tommy’s Arm Fault runs through the mineralized area and may be a structural control for the mineralization.

All securities to be issued in connection with the acquisition of the Project will be subject to a four-month-and-one-day statutory hold period in accordance with applicable securities laws. The acquisition remains subject to the approval of the TSX Venture Exchange and cannot be completed until such approval is obtained. 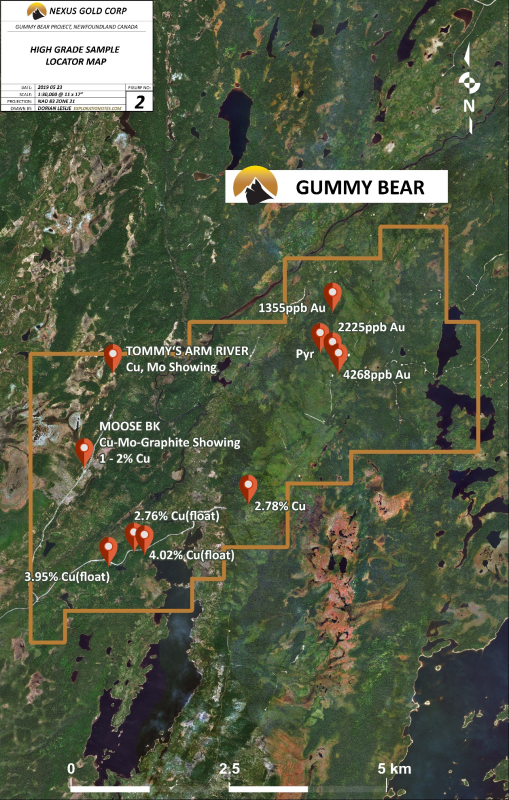