Nexus senior geologist Warren Robb, assisted by personnel from Rinimi Explorations, completed a first phase prospecting campaign designed to identify and verify locations of previous exploration activities and mineralization. A total of seven samples were collected covering areas on McKenzie Island and in the St. Paul Bay area of the property.

Significant results were obtained from localities on McKenzie Island with samples returning 135.4 grams-per-tonne (“g/t”) gold (“Au”) and 9.3 g/t Au, respectively. The 135.4 g/t Au value was obtained from a select sample on a quartz vein hosted in igneous rocks of the dome stock, while the 9.3 g/t Au value was obtained in a select sample of a quartz vein hosted in felsic meta-volcanic rocks on the northern portion of the property.

“McKenzie represents a high-grade opportunity for Nexus in a prolific, world-class district,” said president & CEO, Alex Klenman. “To date the project has now produced several bonanza-grade samples. We have just begun our work there so to add more of this type of result at the outset is certainly encouraging. McKenzie is a flagship property for us, one that we believe has considerable upside. We’re going to obtain as much data as we can in the next few months to best define our drill targets moving forward. With a handful of high-grade results having now been documented and obtained, McKenzie is trending in a very positive direction. We’re looking forward to the development work ahead,” continued Mr. Klenman.

“We are extremely encouraged with what our prospecting has identified thus far,” said Company Geologist and VP Exploration, Warren Robb. “We look forward to hitting the ground a little harder over the summer months to identify new and delineate known mineralization,” continued Mr. Robb.

The Company is currently conducting a detailed prospecting and reconnaissance program, supplemented with ground geochemical and geophysical surveys, over the property to identify geologic trends and structures suitable for drill testing. Phase one field work (including detailed mapping and sampling), under the direct supervision of Nexus Gold senior geologist and Vice President of Exploration, Warren Robb, is continuing throughout the summer months.

Samples were delivered to SGS prep facility in Red Lake, Ontario. The samples were analyzed by SGS where a 50-gram split of pulverized rock was analyzed by fire assay with ICP-OES finish, samples returning greater than 10,000 ppb (10 g/t Au) were re assayed with a gravimetric finish.

About the McKenzie Gold Project

The McKenzie Gold Project is a 1,348.5-hectare high-grade prospect located in the heart of the world-famous Red Lake gold camp. The highly prospective geological setting is analogous to several past producers. McKenzie hosts nine documented historical gold occurrences with limited exploration and is preferentially situated adjacent to Newmont Goldcorp on its east and northern boundaries, and Pure Gold Mining’s Madsen project on the southern boundary.

Historical work on the property has resulted in several significant prospecting discoveries, with bonanza-grade samples returning up to 313 g/t Au. A new showing on the southwest corner of McKenzie Island, located in the northern portion of the project area, was also discovered and returned multiple high-grade samples ranging from 9.37 g/t Au to 331 g/t Au (see accompanying photo). This newer discovery lies approximately 100 meters west of a historical showing where gold values of up to 212.8 g/t Au have been reported in provincial government files.

In 2005, Cypress Development Corp conducted a minimal drill program near the southern boundary that intersected a strongly silicified, sericite-altered, east-west-trending mineralized zone up to 600 meters long and open along strike and to depth. Quartz veining accompanied by sphalerite, arsenopyrite, chalcopyrite and free gold returned gold values in drill core of up to and 2.2 g.t Au over 6 meters.

Quartz veining and sulphide mineralization are also reported in multiple locations on McKenzie Island, within the northern portion of the property boundary. Sampling conducted in 2017 returned up to 18.02 g/t Au in grab samples from the vein exposure. 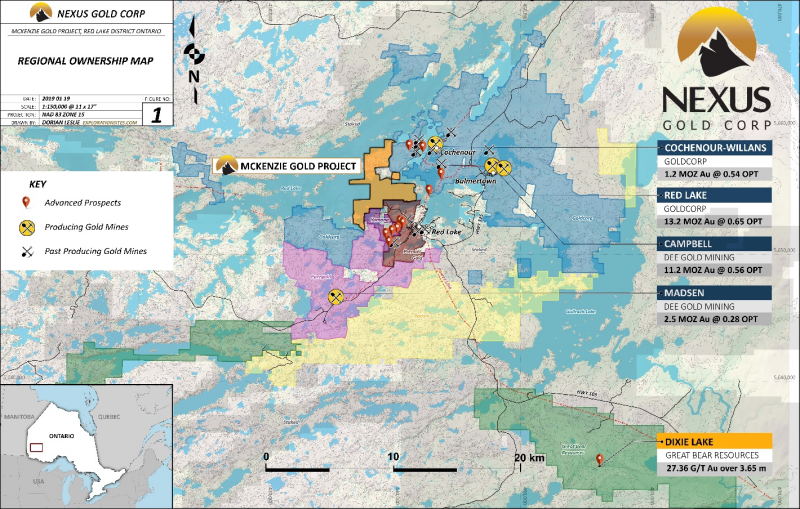 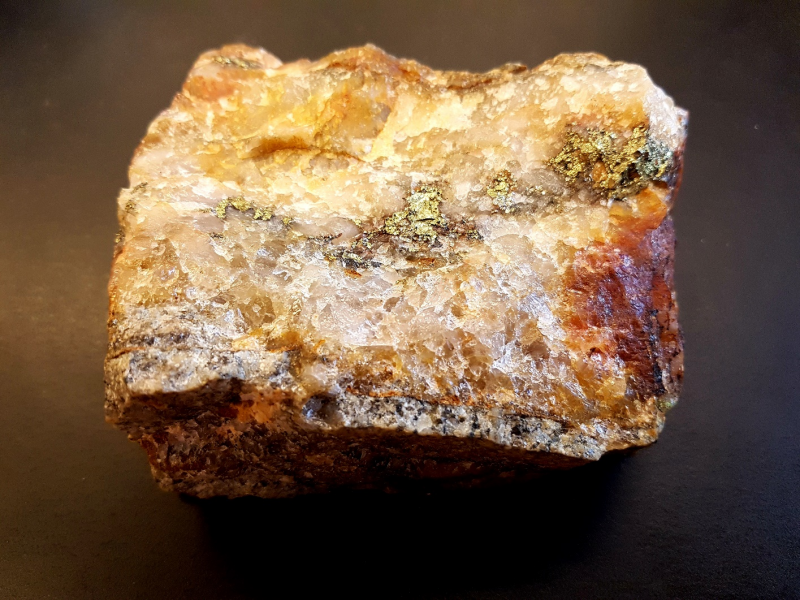 Nexus Gold is a Vancouver-based gold exploration and development company with a portfolio of active projects in West Africa and Canada. The Company is concentrating its efforts on establishing a compliant resource at one or more of it’s four current West African-based projects which total over 560-sq kms (56,000+ hectares) of land located on active gold belts and proven mineralized trends, while also conducting developmental phases on its 100%-owned Canadian projects, McKenzie Gold Project in Red Lake, Ontario, the New Pilot Project, located in BC’s historic Bridge River Mining Camp, and three projects in Newfoundland totalling 3,325 hectares. For more information please visit www.nexusgoldcorp.com.