Ongoing preliminary work consists of prospecting and reconnaissance-style soil sampling involving 50m-spaced sample stations on 100m-spaced, chained and paced, grid lines. The widely-spaced sampling pattern is intended to provide initial broad coverage and assessment of the property’s gold and base metal potential, with more detailed sample coverage to follow, pending favorable assay results (samples are to be regularly submitted for analyses, at Eastern Analytical Ltd, of Springdale, located 20 km from the property).

The initial sampling approach will involve the collection of roughly 750 soils.  Sample line orientation is designed to cross-cut a number of EM conductors interpreted from historical airborne geophysical surveys as well as an area of poorly-exposed sedimentary rocks cut by gold-bearing quartz veins; prospector sampling at the latter site, in 1999, returned several anomalous gold values of up to 2.2 grams-per-tonne (“g/t”) gold (“Au”) with highly anomalous arsenic associated (Quinlan, 1999).

Most proximal to the Gummy Bear property, is the Handcamp base metal-gold prospect discovered in 1928, just 2.5 km to the southwest. The prospect consists of pyrite, chalcopyrite, sphalerite, and galena with historic precious metal values of up to 74 g/t Au and 587 g/t Ag (Hudson & Swinden, 1989).  Within the claims, to the west, are several chalcopyrite (copper) occurrences (Elias, 1957), two of which have molybdenite associated, thus, indicating the presence of a late mineralizing hydrothermal/magmatic fluid system having been superimposed over the prospective VMS environment.

The major portion of the Gummy Bear property, i.e., to the east of the Buchans-Roberts Arm Belt, is underlain by arc-related, rift-basinal, sediments (argillites & turbidites) and post-arc, Silurian-age, flyschoid-type siliciclastics (greywackes, sandstones & conglomerates) of the late Ordovician to Early Silurian Badger Group. The same are intruded by gabbros of the Silurian Hodges Hill Intrusive Suite which demonstrates an environment similar to that of the Botwood basin (located farther east in central Newfoundland) where numerous quartz vein gold prospects occur in sediments intruded by gabbros of the Mt. Peyton Intrusive Suite; here, ongoing drilling, by New Found Gold Corp., at their Queensway gold project, has encountered (and continues to encounter) very high gold grades, over significant widths, in quartz veins.

Updates and results from the ongoing program will be released once received, reviewed, and verified. 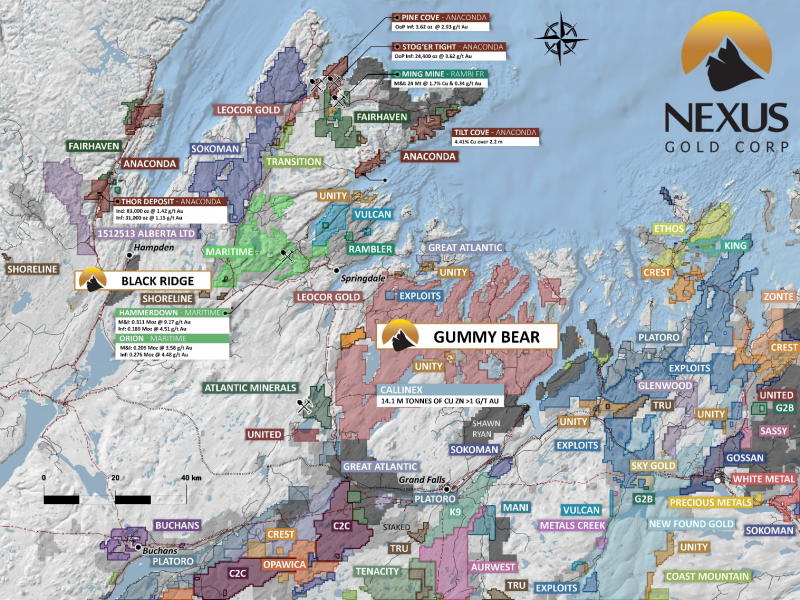 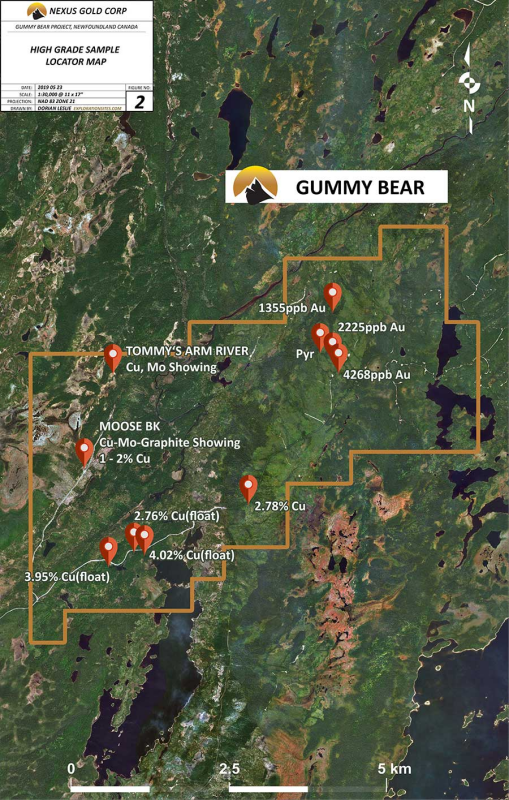 – Grab samples are selective by nature and may not represent the true grade or style of mineralization across the property.

Warren Robb P.Geo., Vice President, Exploration, is the designated Qualified Person as defined by National Instrument 43-101 and is responsible for, and has approved, the technical information contained in this release.

Nexus Gold is a Canadian-based gold exploration and development company with an extensive portfolio of projects in Canada and West Africa. The Company’s primary focus is on its 100%-owned, 98-sq km Dakouli 2 Gold Concession in Burkina Faso, West Africa, and the approximately 1400-ha McKenzie Gold Project, located in Red Lake, Ontario.  The Company is concentrating on the development of its core assets while seeking joint-venture, earn-in, and strategic partnerships for other projects in its portfolio.

Neither the TSX Venture Exchange nor its Regulation Services Provider (as that term is defined in the policies of the TSX Venture Exchange) accepts responsibility for the adequacy or accuracy of this release. This news release may contain forward-looking statements. These statements are based on current expectations and assumptions that are subject to risks and uncertainties. Actual results could differ materially because of factors discussed in the management discussion and analysis section of our interim and most recent annual financial statement or other reports and filings with the TSX Venture Exchange and applicable Canadian securities regulations. We do not assume any obligation to update any forward-looking statements, except as required by applicable laws.

1986: Stratigraphy And Economic Geology Of The Southern Part Of The Roberts Arm Group, Central Newfoundland. In Current Research Part A. Geological Survey of Canada, Paper, No. 86-01A, pages 213-220.

1984: The Gullbridge mine. In Mineral deposits of Newfoundland-a 1984 perspective. Mineral Development Division, Department of Mines and Energy, Government of Newfoundland and Labrador Report 84-03, pages 131-140.

Information on all mineral occurrences and mines are also available through the NL Department of Natural Resources’ online Mineral Occurrence Data System (MODS).